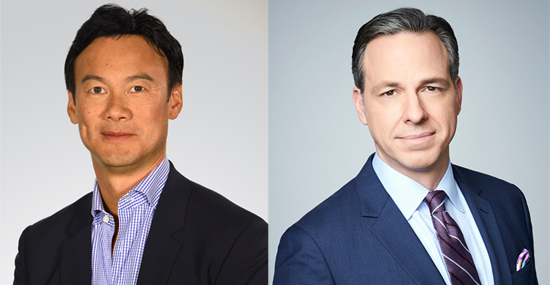 Each spring, the Museum recognizes top leaders in the media industry at its annual industry tribute at the St. Regis Hotel. On Tuesday, June 12, the Museum will honor Dexter Goei, Chairman and CEO of Altice USA, and CNN anchor and chief Washington correspondent Jake Tapper.

Dexter Goei was appointed Chairman and CEO of Altice USA in June 2016 and is responsible for the company’s overall strategic vision and growth in the United States. Altice USA is the country’s fourth largest operator of cable telecommunications systems, which includes the Optimum and Suddenlink branded digital cable television, high-speed internet, voice, WiFi and data products and services across 21 states. Having joined Altice N.V., Altice USA’s parent company, in 2009 as its CEO, Goei helped lead the company’s development and growth from a French cable operator to a multinational telecommunications company operating in France, Portugal, Israel, the Dominican Republic and, most recently, its expansion into the U.S. with the creation of Altice USA. Prior to Altice, Goei was Co-Head of Morgan Stanley’s TMT Group.

CNN anchor and chief Washington correspondent Jake Tapper currently hosts a one-hour weekday program, The Lead with Jake Tapper, and CNN’s Sunday morning show, حالة الاتحاد. Among other awards, his coverage of the 2016 election garnered him the 2017 Walter Cronkite Award for Excellence in Television Political Journalism. On حالة الاتحاد he conducts interviews with top newsmakers on politics and policy, covering Washington, the country, and the world. The Lead covers headlines from around the country and the globe with topics ranging from breaking news in politics and world events, to politics, money, sports, and popular culture. Before joining CNN in 2013, Tapper was at ABC News for nine years. He is also the author of three books, with a debut novel, The Hellfire Club, coming out April 24.

Funds raised from this evening will help the Museum maintain and strengthen its education programs, which serve over 70,000 students and teachers each year.