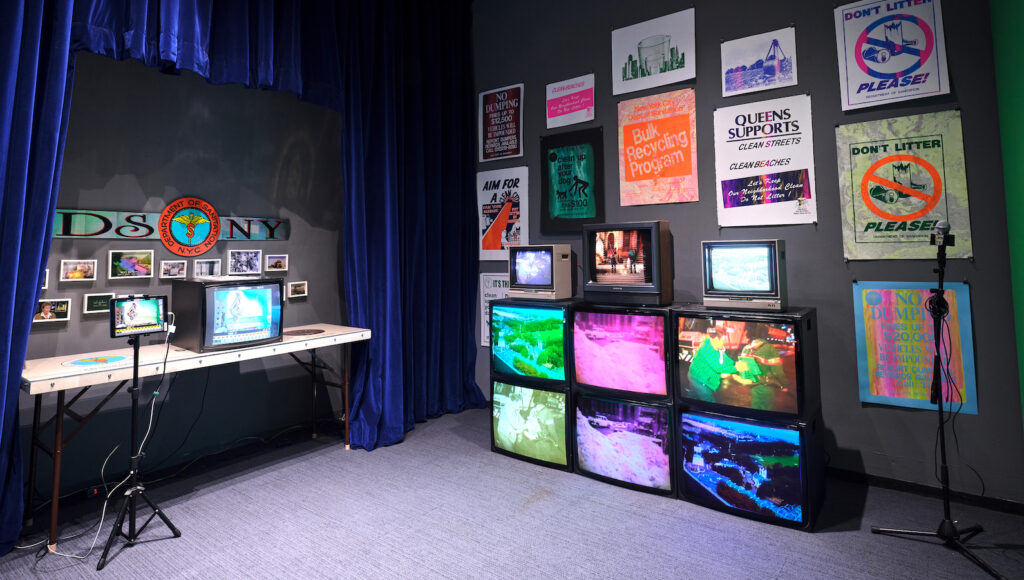 Office of In Visibility Presents: SAN TV (Sanitation Art Network Television) is a video installation by artist sTo Len, who is currently a Public Artist in Residence (PAIR) at the New York City Department of Sanitation, which is part of a municipal residency program created by the Department of Cultural Affairs. While in residence at the Department’s Central Repair Shop in Woodside, Queens, Len began working in a defunct television studio, where he has been using the antiquated video equipment to activate hundreds of hours of forgotten films and videos in various formats; together they span more than a century of documentation capturing the New York Department of Sanitation’s work. Located in the Museum’s Media Lab within Behind the Screen, SAN TV includes a sampling of Len’s reworked discoveries, and with a green screen, viewers have the chance to report from various shuttered waste sites in New York City, such as the Fresh Kills Landfill.

The Office of In Visibility (OOIV) is an ongoing project that bears witness to the labor of the New York Department of Sanitation (DSNY) and its extensive role in New York City history and local lives. Len has been using OOIV as a platform to publicly research and remix DSNY archival materials into his artwork. From film and video to silk-screen posters, artifacts, and ephemera, these reflections offer a glimpse into New York’s history while highlighting the path that led us to the environmental issues we face today.

Photo at top by Argenis Apolinario.

On Saturday, January 28 at 4:00 p.m. in the Fox Amphitheater, sTo Len will be in conversation with Assistant Curator of Public Programs Tiffany Joy Butler to discuss his artistic practice of remixing DSNY’s media archives, and his residency at the New York Department of Sanitation.

This installation is part of a Media Lab Artist Takeover, which features media-making activities in the Museum’s Media and Game Labs that thematically relate to an artist’s work. Click here to learn more about the Media and Game Labs.