The internet has fundamentally changed the way we encounter, create, and share the moving image. While online video is indebted to past modes of cinema and television, most of the nearly one million hours of video created online every day do not fit into their systems of classification. Unlike traditional genres like westerns, musicals, and sitcoms, forms like the vlog, Let’s Play, and unboxing video are native to the web.

These new forms are the result of an accelerated genre-making process, made possible by the pervasiveness of affordable cameras and network connections, the staggering number of new voices this technology has enabled to produce and distribute video outside traditional mainstream methods, and the new ways by which we actively engage with this media. The history of internet video includes a long list of now-defunct but significant technologies and communities, but today these encounters are dominated by YouTube, alongside platforms and apps including Facebook, Twitch, Snapchat, and Instagram.

The new genres of online video respond directly to our contemporary moment, speaking to the possibility of the niche audience, the internet’s capacity for rapid feedback, and humankind’s vast diversity of taste. They are less concerned with legacy narrative forms than with urgently responding to matters of intimacy, identity, agency, our capacity to understand enormous volumes of information, and the nature of truth. That these new forms vary markedly from those of the past requires a close examination of online video on its own terms. 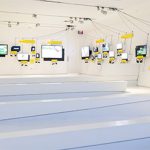