Dir. Jessica Kingdon. 2021, 78 mins. DCP. In Mandarin with English subtitles. This Oscar-nominated documentary is a visceral, curious, and cautionary portrait of the Chinese industrial complex. Filmed in 51 locations—including a Trump hat factory, a bottlecap recycling plant, and a sex doll workshop—Acension offers staggering observations of daily labor, consumption, waste, and wealth that make up a global superpower. Accompanied by an interview with director Jessica Kingdon by Cosmo Bjorkenheim.

Preceded by Europium.
Dir. Lisa Rave. 2014, 21 mins. DCP. Europium is an essay film centered on the rare-earth element Europium, dredged from the bottom of the sea, a silvery element named for the European continent used today in everything from computer screens to banknotes. Director Lisa Rave recalls this history and brings it, ghost-like, into images of the present. Accompanied by an essay by geographer Adam Bobbette. 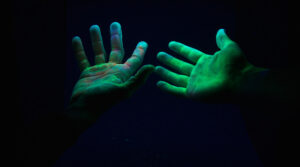 Tickets: $15 / $11 senior and students / $9 youth (ages 3–17) / Free or discounted for MoMI members. Order tickets. Please pick up tickets at the Museum’s admissions desk upon arrival. All seating is general admission. Review safety protocols before your visit.

Cosmo Bjorkenheim is a writer and filmmaker who lives in New York City. He is the managing editor of Screen Slate.

Adam Bobbette is a geographer and Lecturer at the University of Glasgow in the School of Geographical and Earth Sciences. His writing has appeared in the Times Literary Supplement, N+1, and Cabinet Magazine and he is co-editor and contributor to Political Geology: Active Stratigraphies and the Making of Life (2019) and New Earth Histories (2022). New Earth Histories tells the history of the environmental and earth sciences from a cosmopolitan, global perspective. He is currently working on a project about 20th-century spiritual movements, fossil fuel prospecting, and conceptions of self. He is co-founder of Kebun Lithos, a research center on Mount Merapi volcano in central Java.