Cuban Cinema through the lens of Titón

A presentation by Alvaro Pérez Abrahantes, followed by discussion

Tomás Gutiérrez Alea, better known as Titón, is arguably the most important Cuban filmmaker of the twentieth century. With a prolific career that spanned from the 1950s until his death in 1996, Alea thought of film as a powerful tool to make people think and reflect, and not just a form of void entertainment. His groundbreaking film Memories of Underdevelopment is considered one of the best Spanish-language films ever made. Titón chose to stay in Cuba after the revolution in 1959 and as an intellectual he supported a process he believed was necessary. Alea was convinced that he had to take a critical approach to tackling those excruciating issues that pertained to the Cubans. Thus, his excellent films were never detached from controversy.

But how do we talk about film in Cuba? Why it is so important to understand the intricate and often bitter relations between the island and the United States? How were the first moving images taken there? Who created these images? And what about the post-Titón cinema in Cuba? Cuban film scholar Alvaro Pérez Abrahantes addresses these questions and more in a presentation featuring clips from four of the most important films produced by Alea: The Death of a Bureaucrat, Memories of Underdevelopment, The Last Supper, and the Oscar-nominated Strawberry and Chocolate, followed by a discussion. He will also talk about contemporary audiovisual production in Cuba, as well as the forms of distribution on an island that stills struggles with internet connectivity.

About the speaker: Alvaro Pérez Abrahantes is the head of Audiovisual Projects and a member of the board of directors of the Ludwig Foundation of Cuba, a non-for-profit NGO based in Havana. For the last two years he has been a professor of Cuban Image and Cinema for Tisch School of the Arts, NYU.

Tickets: Free with RSVP. To reserve your ticket, please complete this form. 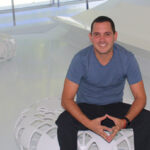