With introduction by curator David Schwartz

Dirs. Colin Low, Roman Kroitor. 1961, 26 mins. 16mm. This National Film Board of Canada black-and-white short visualizes a journey through space with stunning animation. Kubrick studied the film closely, and for 2001, hired its effects artist Wally Gentleman to build models and its narrator, Douglas Rain, to provide the voice of HAL.

Dir. Arthur Lipsett. 1961, 7 mins. 16mm. Kubrick wrote to Canadian avant-gardist Arthur Lipsett that his collage film is “one of the most imaginative and brilliant uses of the movie screen and soundtrack that I have ever seen.”

Jordan Belson. 1961, 8 mins. 16mm. Belson, whose geometric and abstract films have long been seen as an inspiration for 2001’s Star Gate sequence, described his film Allures as “probably the space-iest film that had been done until then. It creates a feeling of moving into the void.”

Jordan Belson. 1968, 6 mins. 16mm. “Momentum is Belson’s most serene and gentle film since Allures. This treatment of the sun as an almost dreamlike hallucinatory experience is both surprising and curiously realistic.” (Gene Youngblood)

Excerpt from To the Moon and Beyond

Con Pederson (Douglas Trumbull). 1964, [excerpt, approx 6 mins.]. Digital projection. Made for the 1964 World’s Fair, the panoramic and immersive short film To the Moon and Beyond led directly to Kubrick’s hiring of two of its key creators: Con Pederson and Douglas Trumbull, who left the Los Angeles company Graphic Films to work with Kubrick in England.

Scott Bartlett. 1968, 9 mins. 16mm. Psychedelic imagery made from a pioneering mix of film and video technology, closeups of an eye, and a soundtrack mixing organic and electronic sounds, are all seen in Scott Bartlett’s avant-garde short, a film with eerie similarities to the Star Gate sequence in 2001.

Order tickets ($15) for screening only

Tickets are discounted for seniors, students, and youth (free or discounted for Museum members). (Members may contact [email protected] with questions regarding online reservations.) 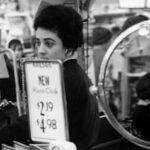