In The Shadow of the Sun + The Birth of the Robot

In The Shadow of the Sun. Dir. Derek Jarman. 1981, 51 mins. DCP source: Basilisk Communications. Preceded by The Birth of the Robot. Dir. Len Lye. 1936, 6 mins. 16mm print source: Nga Taonga Sound & Vision. Len Lye’s and Humphrey Jennings’s collaborative work The Birth of the Robot and Jarman’s Super-8 montage In the Shadow of the Sun are otherworldly audiovisual artifacts. One of Jennings’s few ventures into color filmmaking (he later denounced color as antithetical to his documentary experimentation), Robot is a bizarre advertisement for Shell Oil in which surrealist stop-motion figurines act out a disjointed myth of how robots came to be. (It involves a psychedelic drive through the Egyptian desert and some incredible montage of rainbow color plates and cartoon skulls to the soundtrack of Gustav Holst’s Planets symphony.) In the Shadow of the Sun has a markedly similar palette to Robot, and also makes occultist use of skulls and pyramids in its sublime overlaid montages. Its droning score by Throbbing Gristle is the film’s pulsating heart, and as such it is one of the more collaborative features in Jarman’s oeuvre. (Note: Humphrey Jennings’s creative role in Lye’s film is a source of continued debate. Many descriptions relegate him to the level of a stop-motion figurine maker, but he is also listed as in charge of ‘color direction and production,’ and there is reason to think he may have been an uncredited co-director.)

Tickets: $15 ($11 seniors and students / $9 youth (ages 3–17) / free for children under 3 and Museum members at the Film Lover and Kids Premium levels and above). Order tickets online.(Members may contact [email protected] with questions regarding online reservations.) 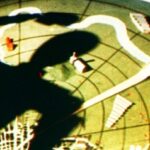 The Birth of the Robot, courtesy of Nga Tonga