Get an exclusive behind the scenes look at the craft that goes into creating the makeup effects that make movie monsters, zombies, aliens, and victims so frighteningly convincing. Makeup artist Mike Marino, whose credits include I Am Legend, Black Swan, and Men in Black 3, will transform one of his assistants into a werewolf, applying techniques and materials he uses professionally. Audience members will also have the chance to get up close and see actual props Marino has made for films. At the end of the demonstration, one audience member will be chosen at random to sit for Marino as he applies special effects makeup on them. Recommended for ages 10+. Program runs approx. 90 mins.

At an early age Mike Marino was inspired by the work of legendary special makeup effects artists Dick Smith and Rick Baker. By the age of 18, he became a protégé of Smith’s and has collaborated with Baker on the film Enchanted and the upcoming Men in Black 3. Marino is now one of the most sought after prosthetic makeup designers in the industry. His company, Prosthetic Renaissance, enlists a unique group of talented artists who are responsible for the production of the prosthetic makeup effects in such projects as Black Swan; The Dictator; Blue Valentine; I Am Legend; Boardwalk Empire; Synecdoche, New York; The Wrestler; Shrek The Musical, among many others. 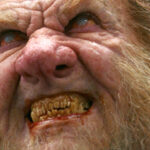