Sebastiane. Dir. Derek Jarman. 1976, 86 mins. Restored DCP source: BFI. Preceded by The Silent Village. Dir. Humphrey Jennings. 1943, 36 mins. 35mm print source: BFI. Jennings, like many early propagandists, was a filmmaker for the masses. His films aimed to encourage liberal populism and patriotism against the very real threat of fascism. Jarman was less interested in the masses than in individual experience, in which world the threat of unrequited love can wreak a similar fascistic havoc. As such, Jennings’s seminal docudrama The Silent Village (which relocates the Lidice Massacre to a Welsh mining town) and Jarman’s Sebastiane (which recontextualizes the ancient story of Saint Sebastian as a homoerotic tragedy) offer intriguing parallel narratives in which enemies gradually knock away at the gates of freedom. The Silent Village and Sebastiane also position Jennings and Jarman as formidable directors of non-professional ensemble casts.

Tickets: $15 ($11 seniors and students / $9 youth (ages 3–17) / free for children under 3 and Museum members at the Film Lover and Kids Premium levels and above). Order tickets online.(Members may contact members@movingimage.us with questions regarding online reservations.) 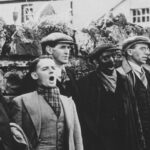 The Silent Village, courtesy of BFI