Shorts: Tales from Planet Kolkata; I Am Micro; Events in a Cloud Chamber

Events in a Cloud Chamber (Dir. Ashim Ahluwalia. 2016, 20 mins. Digital projection. English.) Akbar Padamsee, a pioneer of modern Indian painting, also made two animated films in the 1960s— but these experiments were not well-received by audiences, and one of them, Events in a Cloud Chamber, disappeared. Fifty years later, filmmaker Ashim Ahluwalia uses archival footage, surviving pieces, and narration from Padamsee himself in an attempt to reconstruct the work that was lost.

Tickets: $15 ($11 seniors and students / $9 youth (ages 3–17) / free for children under 3 and Museum members at the Film Lover and Kids Premium levels and above). Order tickets online. (Members may contact members@movingimage.us with questions regarding online reservations.) 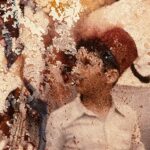 Events in a Cloud Chamber