The Man in the Porkpie Hat: Buster Keaton Shorts

Feb 26: Hosted by Dana Stevens, author of Camera Man: Buster Keaton, the Dawn of Cinema, and the Invention of the Twentieth Century, with a book signing to follow the screening.

This selection of shorts highlights the full comic range of Keaton’s talents. We begin with The Scarecrow (1920), which features a chase scene between Buster and Luke, the Staffordshire bull terrier who appeared in over a dozen silent films and was one of the first canine movie stars. Next up, The Boat (1921) finds Buster building a boat to take his family on a pleasure trip, but after their house collapses and their car sinks into the ocean, the leaky craft becomes their sole residence. In The Goat (1921), after Buster’s face is mistakenly pictured on a “Wanted” poster, he leads the police chief on a merry chase through town. Lastly, The High Sign (1920), Keaton’s first independently produced film, finds Buster as a drifter who takes a job at an amusement-park shooting gallery, only to get mixed up with a secret society of gangsters. 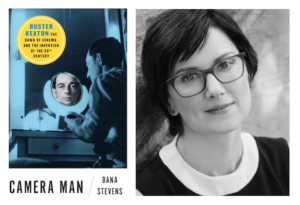 Dana Stevens is the film critic at Slate magazine and a co-host of the magazine’s weekly culture podcast, the Slate Culture Gabfest. She has also written for the New York Times, the Washington Post, The Atlantic and Bookforum. She lives in New York City with her family; you can follow her on Twitter or Instagram at @thehighsign. This is her first book.