Dir. Tobe Hooper. 1974, 83 mins. DCP. With Marilyn Burns, Gunnar Hansen, Paul A. Partain, Edwin Neal, Jim Siedow. Upon picking up an unhinged hitchhiker, a group of young people are unwittingly plunged into a nightmare of torment as they find themselves hunted down by a cannibalistic clan of maniacs. When Hooper first unleashed the Texas Chainsaw Massacre, the film stunned audiences and drew a mixture of admiration and revulsion from critics, among them Roger Ebert who simultaneously praised Hooper’s “weird, off-the-wall achievement” and wondered “why anyone would want to make a movie like this.” The film would be banned in several countries, but today it remains unequaled as a landmark of outlaw filmmaking unparalleled in its impact as perhaps the most frightening film ever made.

Dir. Tobe Hooper. 1986, 101 mins. 35mm. With Dennis Hopper, Caroline Williams, Bill Mosley, Jim Siedow, Bill Johnson. After a decade of silence, the buzz returned with a bizarre sequel that blended humor and gore. Leatherface and his frightful family stalk a radio host in possession of evidence of their grisly crimes while they themselves are stalked by an embittered Texas Ranger (Hopper) who’s determined to confront the ghouls in a chainsaw battle to the death. With this oddly enjoyable film, Hooper sought to underscore the black humor he felt went unnoticed in the 1974 classic, and satirize the growing creative bankruptcy of the slasher genre he helped create. Thanks to an increased budget, the sequel also delivers buckets of blood and a surplus of Tom Savini’s shocking special effects. 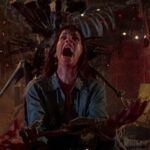