Working on It (Day One)

From March 16–18, the Museum functions as a laboratory for explorations of the creative process. These day-long sessions will bring together filmmakers, critics, and the general public for work-in-progress screenings and performances, artist talks and discussions. Events take place in the Museum’s Redstone Theater and Bartos Screening Room.

Attend all First Look screenings and events, including Working on It, with the purchase of an All Festival pass ($160). Day passes for Working on It are also available below.

Working on It, Session 1

Reverse Shot editors Michael Koresky and Jeff Reichert and critic/filmmaker Farihah Zaman lead a discussion centered on the idea of supernatural creation, summoning a kind of cinematic séance of sound and image and feeling, and encompassing thoughts on writing, criticism, filmmaking, and image-making. The result will be a work of creative collaboration…or at least the beginning of something meaningful. Participating artists: Shonni Enelow, Matthew Eng, Devika Girish, Chloe Lizotte, Vikram Murthi, Kelli Weston, and other festival guests.

Spectral Conversations, a public dialogue led by artists Michael Palmieri and Donal Mosher, as well as an audio recording session centered on the question of what is a ”ghost” in relation to technology, race, class, sexuality, and gender. During the session and throughout the festival participants will have the opportunity to record their responses for inclusion in a collaborative “Working on It” project as well as “Spectral Transmissions”—an ongoing live cinema stage show created by the filmmakers.

The Genius of Marian, a documentary feature from 2013 by director Banker White and co-director Anna Fitch. “A visually rich, emotionally complex story about one family’s struggle to come to terms with the changes Alzheimer’s disease brings.” The filmmakers will be present, and also share a work in progress, Heaven Through the Backdoor, on Thursday, March 17.

Followed by a reception. 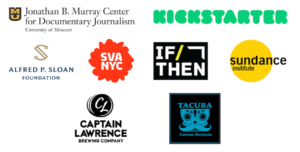