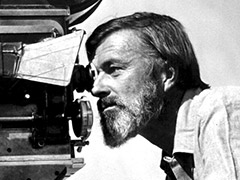 Conrad Hall belongs with figures like Gregg Toland, Jack Cardiff, and Sven Nykvist in the pantheon of great cinematographers—artists who use light and shadow to craft indelible images and tell unforgettable stories. Hall grew up during the Golden Age of Classical Hollywood Cinema. Born in Tahiti in 1926, he attended U.S.C. during the 1940s with the original intention of becoming a journalist. He eventually transferred to the film school, and after over a decade of documentary and television work, Hall began his Hollywood career with The Wild Seed in 1965. Just four years later, he would win his first Academy Award for his work on Butch Cassidy and the Sundance Kid. In the years that followed, he moved across genre and visual styles with accomplished work in films like The Day of the Locust, Tequila Sunrise, and Searching for Bobby Fisher. In 1999, he won his second Academy Award for his astonishing work in Sam Mendes’s Best Picture winner American Beauty. In this interview, conducted just months before Hall’s death in 2003, the cinematographer reflects on a forty year career in Hollywood, including a thoughtful look at his final film, Road to Perdition, which won him a richly deserved third Oscar posthumously.