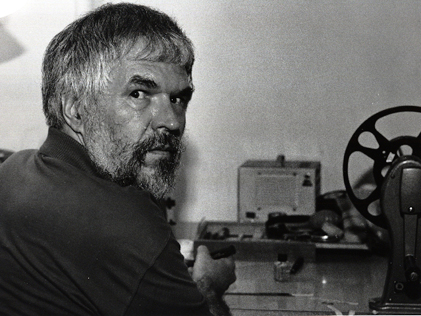 Stan Brakhage was America’s preeminent avant-garde filmmaker. From the early 1950s until his death in 2003, he made more than 300 films, each an adventure in visual perception. His films have astonishing variety, ranging from psychodrama and hand-painted animation to diaristic study, abstract collage, and epic lyricism. In this talk, opening a month-long retrospective, Brakhage humorously recalled his brief flirtation with Hollywood. For Brakhage, film was not primarily a narrative medium: “There are other things that are more natural to film, and that’s where I try to begin. Resisting story, but something more like how the mind thinks—free of words.” Here, he introduces a screening of Desistfilm, The Way to Shadow Garden, In Between, Reflections on Black, The Wonder Ring, and Night Cats, followed by a discussion of his work with Chief Curator David Schwartz.